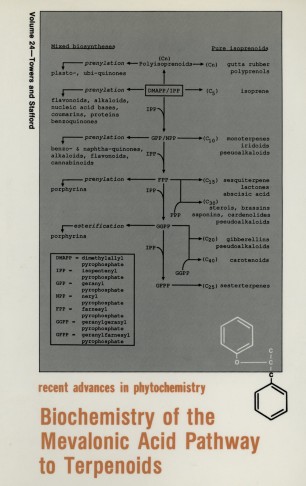 Biochemistry of the Mevalonic Acid Pathway to Terpenoids

This series of lectures was delivered at the 29th meeting of the Phytochemical Society of North America, held at the University of British Columbia in Vancouver, B. C. , Canada on June 16th-20th, 1989. Topics concerning terpenoids, consisting of isoprene units, are now so numerous that a judicious selection for a relatively limited symposium was difficult. We were able to assemble, however, a potpourri of reviews on topical areas of terpenoid chemistry, biochemistry and biology, by scientists who are making exciting contributions and whose work points the way to significant future research. Because of the importance of terpenoids in the life of plants, and indeed in all living organisms, a periodical review of the mevalonic acid pathway and of the subsequent biochemical events leading to the biosynthesis of isoprenoids needs no justification. Life, as we know it, would not be possible without the ability of living organisms to employ this metabolic sequence which proceeds from condensations of three molecules of acetyl-CoA and terminates with the elaboration of the terpenoid precursors, isopentenyl pyrophosphate and dimethylallyl pyrophosphate. In addition to producing obviously essential compounds that are partially or completely of isoprenoid origin (Fig. 1), such as hormones, photosynthetic pigments, compounds involved in electron transport in respiration and in photosynthesis, oxidative enzymes and membrane components, plants elaborate thousands of novel terpenoids, many of which do not as yet have identifiable physiological, biochemical or even ecological roles, e. g. the cardenolides, ecdysones or saponins.