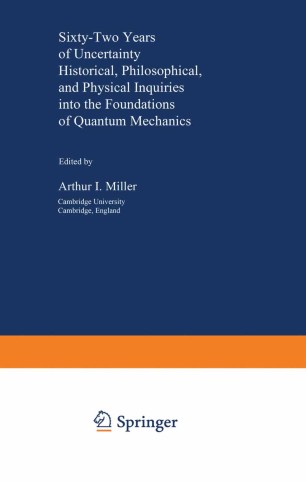 Historical, Philosophical, and Physical Inquiries into the Foundations of Quantum Mechanics

This volume contains proceedings from the International School of History of Science, Sixty-Two Years of Uncertainty: Historical Philosophical and Physical Inquiries into the Foundations of Quantum Mechanics, convened at the Ettore Maj orana Centre for Scientific Culture, Erice, Sicily, 5-15 August 1989. In response to the high state of enth,usiasm from the sixty-one participants there were six to eight lectures each day, beginning at 9:00 AM and often ending at 7:00 PM. Vigorous discussions took place at every opportunity, even including the delightful excursions. The papers presented here are by the twelve invited lecturers (in some cases with coauthors) with a contribution from Philip Pearle. AU of us attending the conference express our appreciation to the exemplary staff of the Ettore Majorana Centre, and particularly to the Centre's Director, Professor Antonino Zichichi. for superb hospitality which made this conference a memorable intellectual and cultural experience. It is a pleasure to acknowledge financial support from the North Atlantic Treaty Organization (NATO) Scientific Affairs Division.