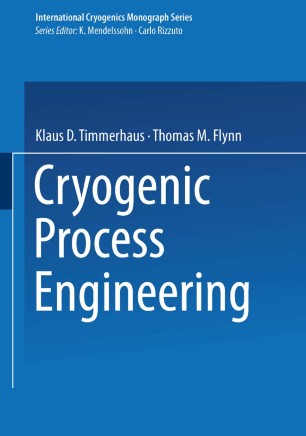 Cryogenics, a term commonly used to refer to very low temperatures, had its beginning in the latter half of the last century when man learned, for the first time, how to cool objects to a temperature lower than had ever existed na tu rally on the face of the earth. The air we breathe was first liquefied in 1883 by a Polish scientist named Olszewski. Ten years later he and a British scientist, Sir James Dewar, liquefied hydrogen. Helium, the last of the so-caBed permanent gases, was finally liquefied by the Dutch physicist Kamerlingh Onnes in 1908. Thus, by the beginning of the twentieth century the door had been opened to astrange new world of experimentation in which aB substances, except liquid helium, are solids and where the absolute temperature is only a few microdegrees away. However, the point on the temperature scale at which refrigeration in the ordinary sense of the term ends and cryogenics begins has ne ver been weB defined. Most workers in the field have chosen to restrict cryogenics to a tem­ perature range below -150°C (123 K). This is a reasonable dividing line since the normal boiling points of the more permanent gases, such as helium, hydrogen, neon, nitrogen, oxygen, and air, lie below this temperature, while the more common refrigerants have boiling points that are above this temperature. Cryogenic engineering is concerned with the design and development of low-temperature systems and components.