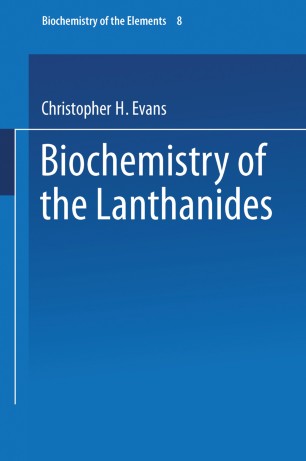 Biochemistry of the Lanthanides

Part of the Biochemistry of the Elements book series (BOTE, volume 8)

By a happy coincidence, the completion of this text coincided with the 200th anniversary of the discovery of gadolinite, the mineral with which the lanthanide story begins. For a group of elements which occur in only trace amounts biologically, and which have no known metabolic role, the lanthanides have spawned a surprisingly large biochemicalliterature. Se­ rious interest in the biochemical properties ofthese elements can be traced to concerns about the safety of radioactive lanthanides toward the end of World War 11. As recent events at Chernobyl indicate, this concern re­ mains topical. However, the literature on lanthanide biochemistry pre­ dates the atomic era, beginning with sporadic, medically motivated studies in the latter part of the 19th century. Much of the present biochemical activity involving the lanthanides centers around their ability to provide 2 important information on the interactions of Ca + with macromolecules and with eukafyotic cells. With the increasing industrial use of the lan­ thanides, their toxicological properties will need to be examined more closely. Rare earth pneumonoconiosis has already been identified as a disease produced by industrial exposure to lanthanides. Several of the biochemical properties of the lanthanides are of relevance to modern medicine. Already cerium-based ointments are used to treat burn wounds, while paramagnetic lanthanides find application in nuclear magnetic res­ onance imaging. This book is an attempt to collate and to present in reasonable detail existing knowledge of lanthanide biochemistry before the literature be­ comes unmanageable.