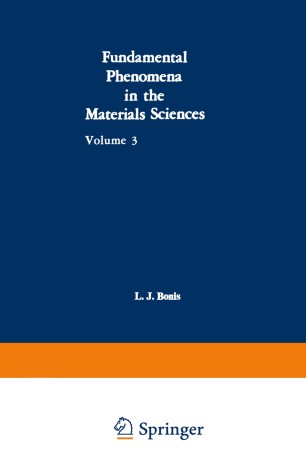 Fundamental Phenomena in the Materials Sciences

Volume 3: Surface Phenomena, Proceedings of the Third Symposium on Fundamental Phenomena in the Materials Sciences Held January 25–26, 1965, at Boston, Mass.

This volume explores in detail the four interrelated branches of the study of surface phenomena-surface thermodynamics, nucleation, diffusion, and fine-particles technology-providing an unusual and comprehensive body of knowledge that will be of interest and practical value to both materials researchers and practising engineers. The growing awareness-since the advent of the space age-among solid-state physicists, metallurgists, ceramists, chemical engineers, and mechanical engineers of the need for a broad interdisciplinary under­ standing of the fundamental phenomena common to all matedals has led in recent years to the development of a new field of scientific investigation, Materials Science. To help promote interest in and con­ tributions to this new technology, annual symposia on "Fundamental Phenomena in the Materials Sciences" have been organized by the Ilikon Corporation. The first symposium, reported in Volume 1 of this series, was held in Boston, Massachusetts, on February 1 and 2, 1963; sintering and plastic deformation were the main topics of discussion. The second meeting, also held in Boston, on January 27 and 28, 1964, was exclusively concerned with the general interdisciplinary problems related to surface phenomena, that is, all of those physical and chemical areas that are pertinent to the surface of a solid, or to the interface between a solid and a gas, a solid and a liquid, or a solid and a solid.