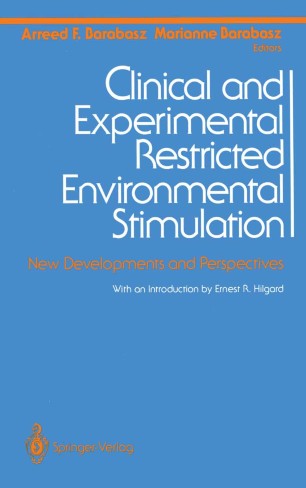 A dozen years ago, Peter Suedfeld introduced the world to the term "REST' to describe the modern technique or therapy involving Restricted Environmental Stimulation. At the time, REST was still equated with "sensory deprivation". Textbooks in psychology and psychiatry cited primarily the work of the 1950s and 60s which suggested that reduction of normal levels of stimulation was, in a sense, a form of torture producing severe psychological disturbances and subjugation of the hapless participant to the whims of an experimenter working in the service of a sinister government. In contrast to this perception, other psychologists and psychiatrists held the unsubstantiated belief that apparent REST effects were merely the result of awe inspiring experimental settings and subject expectancies. Suedfeld was not persuaded by either of these unscientific positions. He (Suedfeld, 1980) argued that REST, when stripped of anxiety producing melodrama, was simply a powerful way to positively alter a variety of psychological and behavioral processes. Research continued. More and more data were published and presented. Research scientists and clinicians began to correct misconceptions. The First International Conference on REST was held in 1983 and IRIS, the International REST Investigators Society, was founded that same year. REST has outlived misconstrued perceptions. The beneficial effects of the technique are now recognized in the majority of scientific texts.