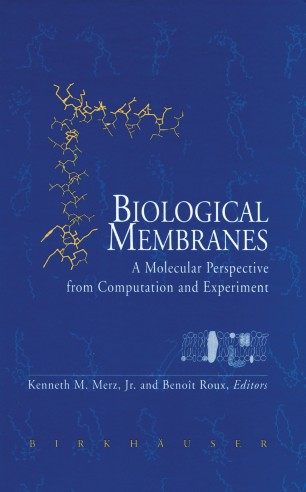 A Molecular Perspective from Computation and Experiment

The interface between a living cell and the surrounding world plays a critical role in numerous complex biological processes. Sperm/egg fusion, virus/cell fusion, exocytosis, endocytosis, and ion permeation are a few examples of processes involving membranes. In recent years, powerful tools such as X-ray crystal­ lography, electron microscopy, nuclear magnetic resonance, and infra-red and Raman spectroscopy have been developed to characterize the structure and dy­ namics of biomembranes. Despite this progress, many of the factors responsible for the function of biomembranes are still not well understood. The membrane is a very complicated supramolecular liquid-crystalline structure that is largely composed of lipids, forming a bilayer, to which proteins and other biomolecules are anchored. Often, the lipid bilayer environment is pictured as a hydropho­ bic structureless slab providing a thermodynamic driving force to partition the amino acids of a membrane protein according to their solubility. However, much of the molecular complexity of the phospholipid bilayer environment is ignored in such a simplified view. It is likely that the atomic details of the polar head­ group region and the transition from the bulk water to the hydrophobic core of the membrane are important. An understanding of the factors responsible for the function of biomembranes thus requires a better characterization at the molec­ ular level of how proteins interact with lipid molecules, of how lipids affect protein structure and of how lipid molecules might regulate protein function.