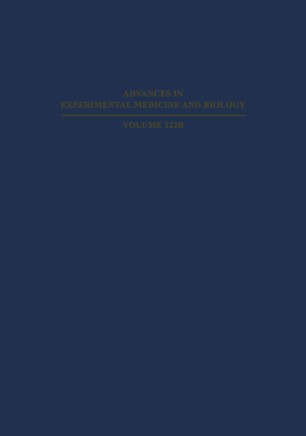 Part of the Advances in Experimental Medicine and Biology book series (AEMB, volume 122B)

These volumes contain the papers which were presented at the Third International Symposium on Purine Metabolism in Man held in Madrid (Spain) in June, 1979. The previous meetings in the series were held in Tel Aviv (Israel) and in Baden (Austria) in 1973 and 1976, respectively. The proceedings were also published by Plenum. Knowledge of the pathophysiology of the purines has developed greatly since the 1950's when it was mainly related to clinical gout, and it is now relevant to many fields of Medicine and Biology. These volumes include papers reporting new work on clinical gout and urolithiasis as well as on some of the subjects which have featured prominently in the previous volumes, including: regulatory aspects of the intermediary metabolism of purines and related com­ pounds, enzymology, methodology, and the results of mutations which affect purine metabolism. However, there have been many new develop­ ments during the last three years and the scope of the communications reflects not only increasing depth of knowledge, but also a widening of the field. This publication has clinical and fundamental impli­ cations for internal medicine, pediatrics, urology, biochemistry, immunology, genetics, and oncology.