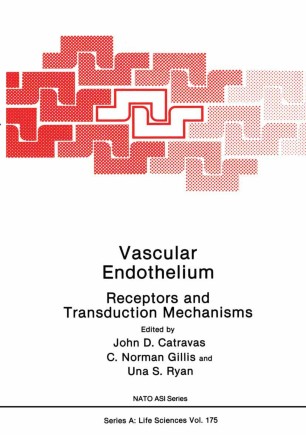 Beyond their obvious role of a barrier between blood and tissue, vascular endothelial cells are now firmly established as active and essential participants in a host of crucial physiological and pathophysiological functions. Probably the two most important factors responsible for promoting the current knowledge of endothelial functions are 1) observations in the late sixties-early seventies that many non-ventilatory properties of the lung could be attributed to the pulmonary endothelium and 2) the establishment, in the early and mid-seventies of procedures for routine culture of vascular endothelial cells. Many of these endothelial functions require the presence of receptors on the surface of the plasma membrane. There is now evidence for the existence among others of muscarinic, a-and /3-adrenergic, purine, insulin, histamine, bradykinin, lipoprotein, thrombin, paf, fibronectin, vitronectin, interleukin and albumin receptors. For some of these ligands, there is evidence only for the existence of endothelial binding sites. Traditionally, agonist binding must elicit a response for the binding site to be considered a receptor and, in some cases, the nature of the response resulting from the interaction of a substance with the endothelium remains unclear. It is beyond the scope of this introduction to even enumerate the various endothelial homeostatic processes. This monograph contains the proceedings of the Advanced Studies Institute on "Vascular Endothelium: Receptors and Transduction Mechanisms" held in Porto Carras, Greece from June 18-29, 1988.