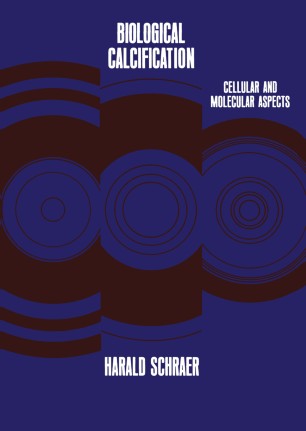 The deposition of calcium-containing salts is a widespread phenomenon in both the plant and animal kingdoms. Its occurrence suggests a generalized biological adaptation to environments rich in calcium. Indeed, the Archaean ocean was rich in calcium carbonate, and traces of ancient organisms have been found in lime­ stones estimated to be about 2. 7 billion years old. The fundamental nature of biological calcification makes it a subject of interest not only to the student of calcium metabolism and skeletal physiology, but also to biologists in general. As in many areas of biological science recent progress in this field has been rapid, and no attempt was made here to cover all the biological systems in which calcifica­ tion is an important facet of the organisms' method of operation. Calcification is approached in this volume at the levels of the cellular sites and molecular mechan­ isms that are involved in this process. The ultrastructural and chemical features of the cells and their products which are associated with calcification are empha­ sized in several chapters. The editor, in inviting contributions from authors, in­ tended that collectively the chapters should convey a sense of the ubiquitous and essential nature of the role of calcification in several phyla of the plant and animal kingdoms. The researchers were biochemists, physical chemists, cell biologists and physiologists; some represented medicine and dentistry; all were interested in calcification.