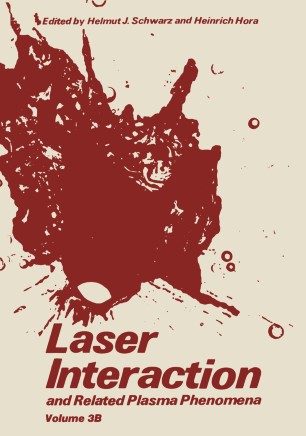 As was the case in the two preceding workshops of 1969 and 1971, the Third Workshop on "Laser Interaction and Related Plasma Phenomena" held in 1973 was of international character. The main purpose was to review the advanced status of this particular and turbulent field of physics as it had developed vigorously in all major laboratories of the world since 1971. Due to recently accelerated advancements, it was hardly possible to present a com­ plete tutorial review; the subject is still in its premature stages and changing rapidly. A topical conference would have been too specific for a group of physicists with broad backgrounds working in the field or for those just about to enter it. It was the aim of the workshop and it is the aim of these proceedings to help this large group of scientists find their way within the highly complex and sometimes confusing results of a new field. We optimized the task of the workshop with extensive reviews on several topics and at the same time included more detailed infor­ mation for specialists. The differences in their conclusions were not a matter of contention but rather served to complement the advanced results. As in the preceding workshops, we directed our attention toward critical realism in respect to the complexity of the field. What is meant here is exemplified in the contribution by R. Sigel ~.667).