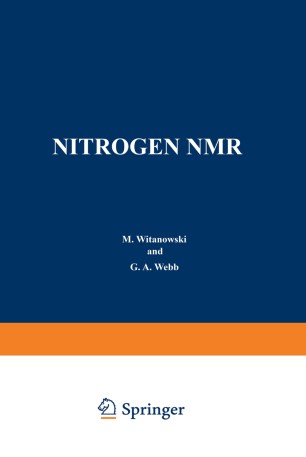 To date nitrogen NMR has been discussed in research papers and review articles throughout the scientific literature. It has been our aim in preparing this book to provide a comprehen­ sive account of the widely spread applications of nitrogen NMR. The relevant literature has been surveyed from the beginnings of NMR until early 1972. The steady annual growth in the number of references cited since 1965 is ample evidence of the ever increasing importance of the subject. Sufficient theoretical and experimental background is given for an understanding of the applications dealt with in later chapters. The basic principles of NMR are developed with a theoretical approach to chemical shifts and spin-spin coupling constants, particular emphasis being given to nitrogen nuclei. Following this the experimental aspects of nitrogen NMR are adequately described. Special emphasis is given to the observable effects of the nuclear quadrupole moment of the 14 N nucleus. It is appro­ priate that this topic be dealt with in depth since quadrupolar interactions frequently dominate the information available from a study of the 14 N nucleus and other nuclei spin­ coupled to it. The applications of nitrogen chemical shift data to organic and inorganic molecules are covered in two extensive chapters which include the effects of paramagnetism on nitrogen NMR.