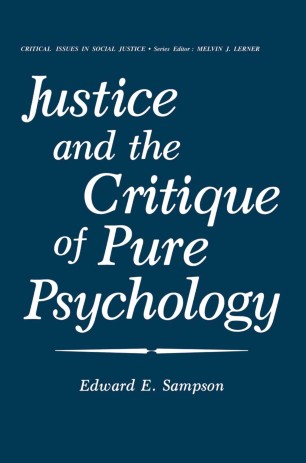 Justice and the Critique of Pure Psychology

Empiricist philosophy of science of the kind that promised truth through method and a unification of science now lies in disarray. Arguments over the indeterminancy of theoretical language, the inadequacy of induction, the empirical incommensurability of competing theories, the possibility or im­ possibility of scientific progress, and the applicability of natural science metatheory and methods to problems of human action have allIed to a loss in confidence. As it is commonly said, the philosophy of science is now in a "postempiricist" phase. It is a phase marked by heated disagreement over the possibility of empirically grounded scientific knowledge. Because the orienting assumptions of traditional psychology had been largely derived from the early logical empiricist program for science, the general deteriora­ tion in confidence at the philosophic level was inevitably to have repercus­ sions within psychology. The extensive ferment that has occurred within so­ cial psychology over the past decade, often termed "the crisis in social psychology," must properly be viewed within this context. And, in cases where criticisms of the traditional craft have been initiated on other than philosophical grounds, traditional logical empiricist answers have no longer been found sustaining. In effect, the science of psychology no longer rests on a firm metatheoretical base, and the future remains very much in the bal­ ance. Within this critical period of search and reappraisal, there are few voices that equal in significance that of Edward Sampson.