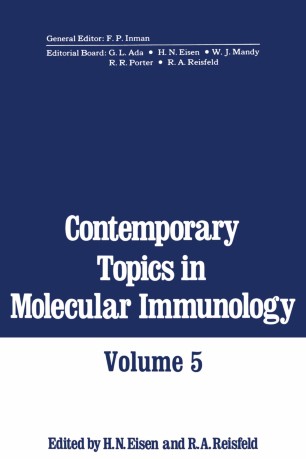 Immunochemistry, recently rechristened molecular immunology, has been pre­ occupied throughout its long history with the structure and function of antibodies and the specificity of antibody-antigen reactions. With the recent X-ray diffrac­ of several crystallized immunoglobulin (Ig) fragments and a whole tion analyses Ig molecule, the three-dimensional structure of antibodies and their ligand­ combining sites has been realized, marking the concluding stages of a phase of immunological research that can be traced back at least 75 years. At the same time chemically minded immunologists have been moving in new directions. A substantial beginning in one direction has been made with the purification of messenger RNAs (mRNAs) for Ig chains. Hybridization of these RNAs (or their DNA copies made with the enzyme reverse transcriptase) to cell DNA is beginning to provide convincing estimates of the number of germ-line Ig genes. And some hybridization studies have already yielded suggestive evidence for translocation of V and C genes from separate to contiguous positions in DNA isolated from cells at different stages of differentiation. Moreover, in vitro trans­ lation of Ig mRNAs has revealed a remarkably hydrophobic stretch of about 20 amino acids at the N-terminus of the nascent Ig chain. This extra piece is absent in the Ig extracted from or secreted by plasma cells, presumably because it is rapidly cleaved from the "preimmunoglobulin" chain within the cell, but the extra piece probably plays a key role in directing the synthesis of prelg to the cell's secretory pathway.