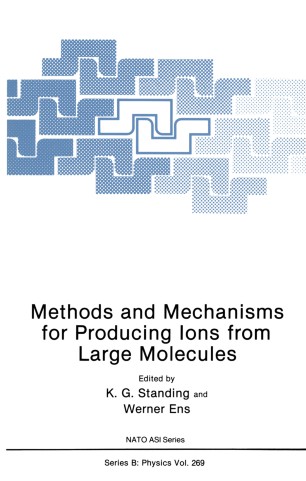 Methods and Mechanisms for Producing Ions from Large Molecules

A NATO Advanced Research Workshop on Methods and Mechanisms for Producing Ions from Large Molecules was held at Minaki Lodge, Minaki, Ontario, Canada, from 24 to 28 June 1990. The workshop was hosted by the time-of-flight group of the Department of Physics at the University of Manitoba, and was attended by 64 invited participants from around the world. Twenty-nine invited talks were given and 19 papers were presented as posters. Of the 48 contributions, 38 are included in these proceedings. The conference was organized to study the rapidly changing field of mass spectrometry of biomolecules. Particle-induced desorption (especially with MeV particles) has been the most effective method of producing molecular ions from biomolecules. An important part of the workshop was devoted to recent developments in this field, particularly to progress in understanding the fundamentals of the desorption process. In this respect, the meeting was similar to previous conferences in Marburg, FRG (1978); Paris, F (1980); Uppsala, S (1981); College Station, USA (1983,1984); Wangerooge, FRG (1986); Orsay, F (1988); Spiekeroog, FRG (1989); and to the IFOS series of meetings at Munster, FRG (1981,1983,1985,1987) and L6vAnger, S (1989). As in the most recent of these meetings, there was some emphasis on new developments, particularly cluster bombardment. A departure from the concentration on particle bombardment processes at this conference was inspired by the dramatic results obtained with two new methods for producing molecular ions from large molecules: matrix-assisted laser desorption and electrospray.