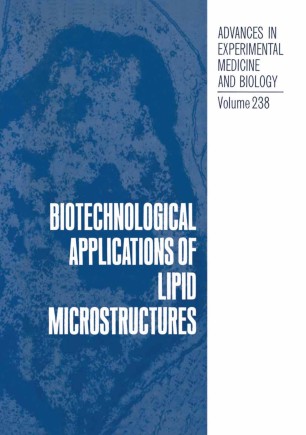 Part of the Advances in Experimental Medicine and Biology book series (AEMB, volume 238)

In the twenty years since Bangham first described the model membrane system which he named "liposomes", a generation of scientists have explored the properties of lipid-based microstructures. Liposomes of all sizes, tubular and helical structures, and self-assembled lipid films have been prepared and studied in detail. Many of the advances· in the basic research have led to significant technological applications. Lipid microstructure research has begun to mature and it is an appropriate time for an in-depth look at the biotechnological applications, both achieved and potential. As a forum for active discussions within this growipg field, two Workshops were organized: "Technological Applications of Phospholipid Bilayers, Vesicles and Thin Films", held in Puerto de la Cruz, Tenerife, Canary Islands; and "Biotechnological Applications of Membrane Studies", held in Donostia-San Sabastian, Basque Country, Spain. The organizers of these Workshops believe that development of lipid self-assembly into a technological discipline requires significant interaction across traditional scientific boundaries. Thus the Workshops gathered an eclectic group of colleagues whose interests ranged from basic research into structure, interactions and stabilization of biomembranes to applications of lipid microstructures such as artificial cells, diagnostic reagents, energy transfer systems, and biosensors.