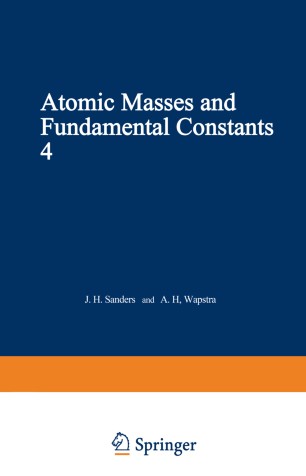 The Conference on Nuclear Masses and their Determination which was held at the Max Planck I nstitute in Mainz from 10 to 12 July 1956 resulted in the formation by the International Union of Pure and Applied Physics of a Commission on Atomic Masses and Related Constants. Under the auspices of this Commission conferences covering these subjects were held in Hamilton, Ontario (12-16 September, 1960), in Vienna (15-19 July 1963) and in Winnipeg (28 August-1 September 1967). After the last of these conferences the Commission felt that the position regarding nuclear masses was reasonably good and that as a consequence the fundamental constants should get more emphasis in future conferences. For this reason they were very pleased to accept an offer from the National Physical Laboratory to accept the main burden of organizing the Fourth International Conference on Atomic Masses and Fundamental Constants. An Organizing Committee was appointed with the members: J. H. Sanders, Chairman B. W. Petley, Secretary A. Horsfield, Treasurer P. Dean A. H. Wapstra. They were assisted by a Program Committee consisting of: A. H. Wapstra, Chairman E. R. Cohen A. Horsfield W. H. Johnson, Jr. J. H. Sanders J. Terrien.