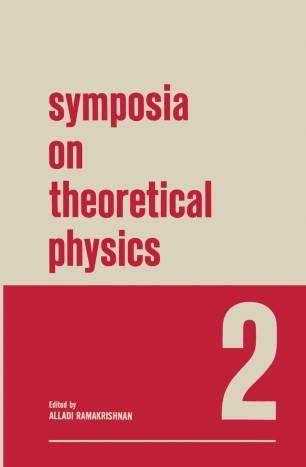 2 Lectures presented at the 1964 Second Anniversary Symposium of the Institute of Mathematical Sciences Madras, India

The second volume of this series is devoted to the Proceedings of the Second Anniversary Symposium under the chairmanship of the Niels Bohr Visiting Professor of the year - Professor L. Rosenfeld, Deputy Director of NORDIT A, Copenhagen, and the Editor of Nuclear Physics. With particular appropriateness, the Symposium was inaugu­ rated by the Honorable C. Subramaniam, Union Cabinet Minister, the founding father of the Institute. The meeting was characterized by two features: (1) the enlargement of the scope of the discussions in theoretical physics, with the inclusion of many-body problems and statistical mechanics! (2) Seminars on pure mathematics, stimulated by the prdence and participation of Professor Marshall H. Stone of Chicago as the First Ramanujan Visit­ ing Professor at the Institute. The year 1963 marked a new stage in the development of high­ energy physics - the first successes of SU (3) symmetry and the eight­ fold way had such an impact on the scientific world that the hard, unyielding domain of strong interactions was now again open to ex­ ploration. The volume opens with two significant lectures by Sudarshan and O'Raifeartaigh on fundamental problems relating to internal sym­ metries. The theory of Regge poles, after its initial triumph, met with rough weather, the nature and intensity of which can be realized from the series of discussions in this volume.