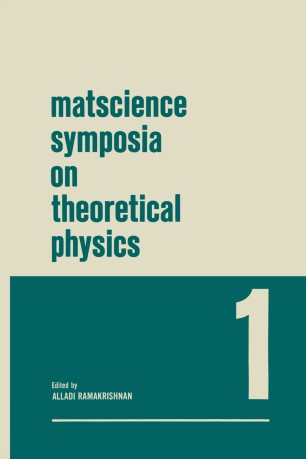 Lectures presented at the 1963 First Anniversary Symposium of the Institute of Mathematical Sciences Madras, India

The MATSCIENCE Institute holds two scientific meetings a year, an anniversary symposium in January to commemorate its birth in 1962 and a three-week summer school in August. The proceedings of the first three meetings were initially made available for private circulation as cyclostyled notes. Professor Rosenfeld, the editor of Nuclear Physics, expressed the view that such material, which repre­ sented the cooperative effort of the scientists from various countries who participated in the visiting program of our Institute, should be published in a "more permanent form" to reach a wider community of readers. We were given the opportunity to do this by Mr. Earl Coleman, President of Plenum Press, who made the spontaneous offer, during his visit to Madras just a year ago to publish these proceedings as a continuing series. It was also decided to include in each volume certain lectures delivered during the year, though not at the meeting itself, if they were relevant to the subject matter of the symposium. The handsome effort of Plenum Press to bring out the series begin­ ning with the very first symposium has been matched by the willing cooperation of our visiting scientists, who have made this an inter­ national endeavor, the wholesome consequences of which will be felt beyond the domain of science.