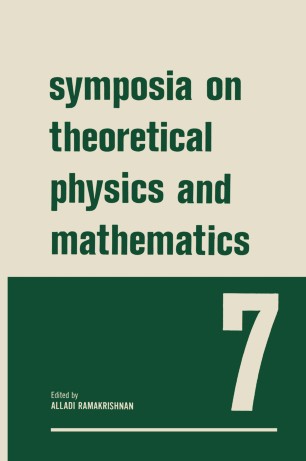 Symposia on Theoretical Physics and Mathematics

7 Lectures presented at the 1966 Summer School of the Institute of Mathematical Sciences Madras, India

This volume contains the proceedings of the Third Matscience Summer School held at Bangalore in September, 1966. The special feature of these proceedings was two systematic series of lectures, one by F. Pham of C.E.N., Saclay and CERN, Geneva and the other by G. Rickayzen of the University of Kent, Canterbury. Pham dwelt at length on the applications of the methods of alge­ braic topology and differential forms to the study of the analytic properties of S-matrix theory, in particular, with reference to the location of singularities of the multiple scattering processes. This exposition was a natural sequel to the lectures of V. L. Teplitz, pub­ lished in an earlier volume of this series. Rickayzen discus.sed in detail the latest theory of superconductivity. Other lectures were those of Scadron, who dealt with some formal features of potential scattering theory, and B. M. Udgaonkar and A. N. Mitra, who spoke on certain aspects of bootstraps and quark models, respectively. The contributions in pure mathematics in this volume include two lectures by S. K. Singh, one on the field of Mikusinski operators and another on Riemann mapping theorem, and a lecture on cosine func­ tionals by P. L. Kannappan. One of the highlights of the symposium was a lecture by S. K. Srinivasan who is keeping alive the interest of the Madras group in the theory of stochastic processes and who, in particular, has enlarged the domain of the application of the theory of product densities.