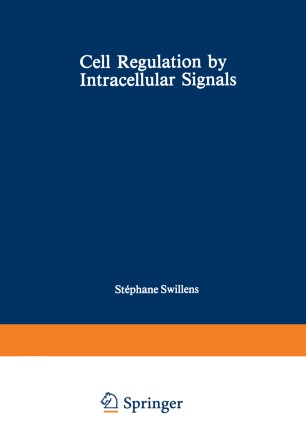 In 1980, the IVth International Cyclic Nucleotide Conference was held in Brussels. As this meeting attracted many investigators involved in cyclic nucleotides and calcium role in intracellular regulation, it was thought that this opportunity could be used to organize, prior to the Congress, an in-depth introductory course on the subject. This was carried out as a NATO Advanced Study Institute. The participants included Ph. D. students and M. D. s engaged in a research training, but also fully trained and well known researchers who wanted a refresher course on the whole subject. During the course, most of the participants and lecturers asked to be provided with a text summarizing the basic lectures of the course. This book was therefore conceived as a basic textbook on the regulation and action of intracellular signal molecules, concentrating mainly on cyclic nucleotides and calcium. It was deliberately kept at a basic level. We would therefore be happy if it could be used as an introduction for interested M. D. s or Ph. D. s working in other fields or entering this field and as a general refresher for researchers interested in the subject. For this reason, very general schemes have been asked of the authors, along with reading lists of available reviews rather than extensive bibliographies. The editors should like to thank the NATO Scientific Affairs Committee for having supported the course and Mrs. Gh. Wilmes who prepared the manuscripts. S. SWILLENS J. E.