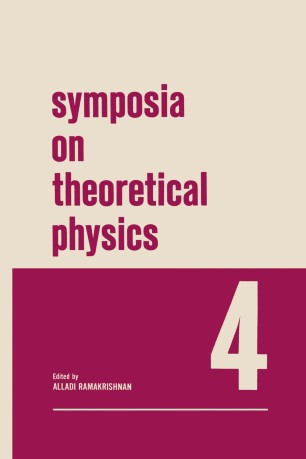 Lectures presented at the 1965 Third Anniversary Symposium of the Institute of Mathematical Sciences Madras, India

The Third Anniversary Symposium, held in January 1965, was devoted mainly to various topics in elementary particle physics, with a few lectures on many-body problems and a short supple­ mentary program in mathematics. * In the Introductory Address Professor V. Weisskopf, Director­ General of CERN, Geneva, presented a broad survey of the then current scene in elementary particle physics, the most dominant trend in which is the concept of symmetry. He traced the use of the concept of rotational invariance and symmetry under permutation of identical objects in the realm of atomic spectra and how, with the inclusion of isotopic spin, such use was extended to the study of properties of nuclei. Professor Weisskopf also described how, in ad­ dition, elementary particles are characterized by a new quantum number, the hypercharge, which, with isotopic spin, is part of a wider symmetry SU(3). He mentioned three classes of experiments at CERN, one in search of quarks, one to investigate the existence of vector bosons suggested by theories as possible mediators of weak interaction, and one to test the existence of cosmic forces to explain C P or T violation. The quotations from Newton's Opticks at the beginning and the end of the lecture were strikingly relevant. Two lectures dealt with the application of SU(3) symmetry to weak and strong interactions, respectively. Ph. Meyer of the Uni­ versity of Paris, Orsay summarized his work on the conserved vector current hypothesis in relation to broken symmetries.