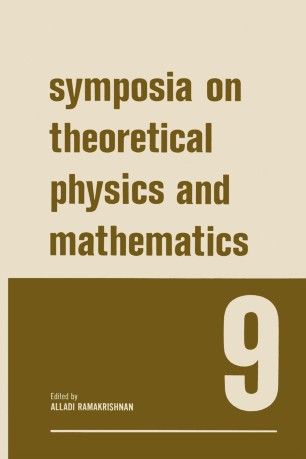 Symposia on Theoretical Physics and Mathematics 9

Lectures presented at the 1968 Sixth Anniversary Symposium of the Institute of Mathematical Sciences Madras, India

This volume represents the proceedings of the Sixth Anniversary MATSCIENCE Symposium on Theoretical Physics held in January 1968 as well as the Seminar in Analysis held earlier, in December 1967. A new feature of this volume is that it includes also contributions dealing with applications of mathematics to domains other than theoretical physics. Accordingly, the volume is divided into three parts-Part I deals with theoretical physics, Part II with applications of mathematical methods, and Part III with pure mathematics. The volume begins with a contribution from Okubo who proposed a new scheme to explain the CP puzzle by invoking the intermediate vector bosons. Gordon Shaw from Irvine dealt with the crucial importance of the effects of CDD poles in partial wave dispersion relations in dynamical calculation of resonances. Applications of current algebra and quark models were considered in the papers of Divakaran, Ramachandran, and Rajasekharan. Dubin presented a rigorous formulation of the Heisenberg ferromagnet.