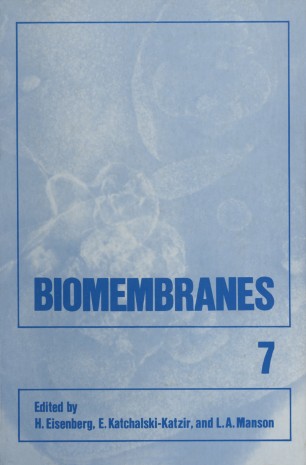 Part of the Biomembranes book series (B, volume 7)

It was a warm, sunny morning in Rehovot. The sky was c1ear as it always is in June. As I walked to the Institute that morning, too many cars were passing by, too many people were hurrying onto the Institute's grounds. No one was smiling, acquaintances were recognized by a slight nod of the head. When I turned the corner, a few people already had gathered on the lawn in front of the Jacob Ziskind building. This number was to swell to thousands before the service was over. We were to be joined by the President of Israel, its first Prime Minister, many members of the cabinet, and other great, near-great, working colleagues, and residents of the town. The purpose of all this activity was written on everyone's face, and underlined by the casket that lay in the rotunda of the building. His wife was sitting there, his children, his brother, his students both past and present. One could hear the silence of the participants. I stood inside for a while, overlooking the rotunda. A long line of mourners filed by, offering their sympathies to the family. Suddenly a woman, dressed in black, fell to her knees in front 9f Rina, sobbing. It was the wife of the Japanese Ambassador to Israel. I moved to join the crowd outside. People were standing on the lawn, gingerly trying to avoid stepping on a flower.