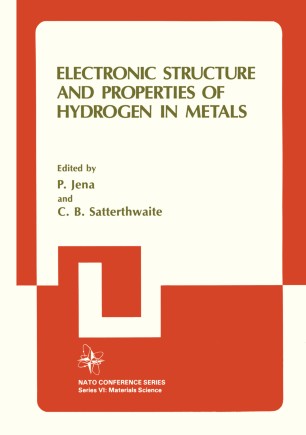 Electronic Structure and Properties of Hydrogen in Metals

Hydrogen is the smallest impurity atom that can be implanted in a metallic host. Its small mass and strong interaction with the host electrons and nuclei are responsible for many anomalous and interesting solid state effects. In addition, hydrogen in metals gives rise to a number of technological problems such as hydrogen embrittlement, hydrogen storage, radiation hardening, first wall problems associated with nuclear fusion reactors, and degradation of the fuel cladding in fission reactors. Both the fundamental effects and applied problems have stimulated a great deal of inter­ est in the study of metal hydrogen systems in recent years. This is evident from a growing list of publications as well as several international conferences held in this field during the past decade. It is clear that a fundamental understanding of these problems re­ quires a firm knowledge of the basic interactions between hydrogen, host metal atoms, intrinsic lattice defects and electrons. This understanding is made particularly difficult by hyrogen's small mass and by the large lattice distortions that accompany the hydrogenation process. The purpose of the "International Symposium on the Electronic Structure and Properties of Hydrogen in Metals" held in Richmond, Virginia, March 4-6, 1982 was to increase our fundamental under­ standing of hydrogen in metals. Such knowledge is essential in solving technologically important questions. The symposium con­ sisted of twenty-two invited papers and seventy-two contributed poster presentations and attracted nearly 150 participants from thirteen countries. The proceedings of this symposium constitute this book.