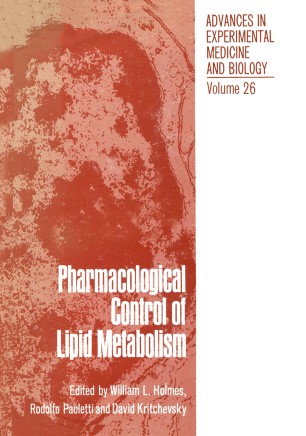 Part of the Advances in Experimental Medicine and Biology book series (AEMB, volume 26)

This Symposium was the fourth in a series which began in Milan, Italy, in 1960. Each meeting has introduced or developed some new concepts in the areas of lipid metabolism and drugs. The meetings have served as a springboard for new ideas which have, between meetings, become accepted and exploited. This meeting has been no exception. Principal among the many new concepts discussed were lipoprotein synthesis and metabolism, apoprotein structure and function, whole body metabolism of cholesterol, and aspects of myocardial and aortic metabolism. The Symposium also included a summary of current thought on management of hyperlipemias and atherosclerosis. Data on more than 30 drugs were introduced and discussed. We have every expectation that the next Symposium will include material which is now only in the formative stage. The Organizing Committee would like to acknowledge the invaluable assistance of Miss Mary Constant, Mr. Ralph H. Hollerorth, Mrs. Carolyn P. Hyatt and Miss Jane T. Kolimaga, whose efforts contributed significantly (p < .001) to the success of this Symposium.