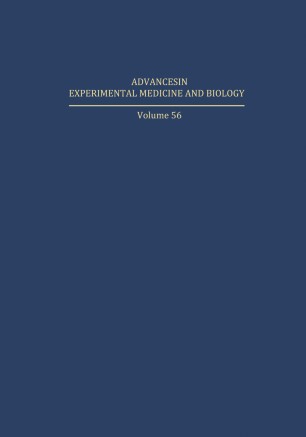 Part of the Advances in Experimental Medicine and Biology book series (AEMB, volume 56)

A number of excellent symposia, reviews and monographs on the biology of ethanol have been published during the last decade. Al­ though it may appear that another such publication may be superflu­ ous, the subject of alcohol abuse is still open for further explora­ tion and the field of the biochemical pharmacology of ethanol is in its infancy. This is evidenced, for example, by the unavailability of any drugs that are designed specifically for the treatment of alcohol intoxication or alcohol addiction. The impetus for this publication was generated by a spontane­ ous enthusiasm following the symposium on BiochemicaZ Ph~acoZogy of EthanoZ that was organized at the annual meeting of the American Chemical Society, Division of Biological Chemistry in August 1973 in Chicago. It was the first symposium on such a topic ever in­ cluded in the program of that large society of American chemists. The original aim of the symposium was to acquaint the members of the society with some basic facts about the biological chemistry of ethanol. The symposium included seven papers and covered a rela­ tively narrow range of ethanol biochemistry. In view of the enthu­ siasm shown at the Chemical Society meeting, the panelists decided to publish the program and to amplify it by inclusion of additional topics which have remained relatively unexplored in earlier publica­ tions. In addition, reviews have been included which discuss old topics from a new perspective.