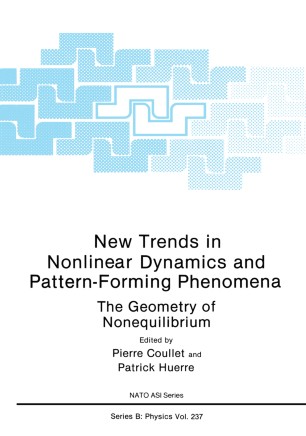 The Geometry of Nonequilibrium

The basic aim of the NATO Advanced Research Workshop on "New Trends in Nonlinear Dynamics and Pattern-Forming Phenomena: The Geometry of Nonequilibrium" was to bring together researchers from various areas of physics to review and explore new ideas regarding the organisation of systems driven far from equilibrium. Such systems are characterized by a close relationship between broken spatial and tempo­ ral symmetries. The main topics of interest included pattern formation in chemical systems, materials and convection, traveling waves in binary fluids and liquid crystals, defects and their role in the disorganisa­ tion of structures, spatio-temporal intermittency, instabilities and large-scale vortices in open flows, the mathematics of non-equilibrium systems, turbulence, and last but not least growth phenomena. Written contributions from participants have been grouped into chapters addressing these different areas. For additional clarity, the first chapter on pattern formation has been subdivided into sections. One of the main concerns was to focus on the unifying features between these diverse topics. The various scientific communities repre­ sented were encouraged to discuss and compare their approach so as to mutually benefit their respective fields. We hope that, to a large degree, these goals have been met and we thank all the participants for their efforts. The workshop was held in Cargese (Corsica, France) at the Institut d'Etudes Scientifiques from August 2nd to August 12th, 1988. We greatly thank Yves Pomeau and Daniel Walgraef who, as members of the organising committee, gave us valuable advice and encouragements.