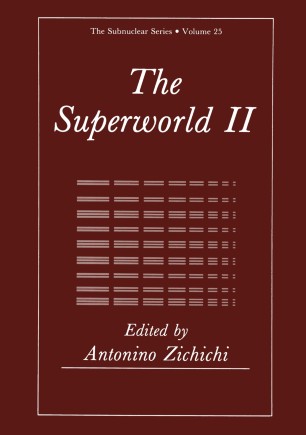 Part of the The Subnuclear Series book series (SUS, volume 25)

During A:.lgust 1987. a group of 76 physicists from 51 laboratories in 22 countries met in Erice for the 25th Course of the International School of Subnuclear Physics. The countries represented were: Austria. Bulgaria. Canada. Chile. China. Colombia. Czechoslovakia. France. Federal Republic of Germany. Greece. Hungary. India. Italy. Lebanon. The Netherlands. Poland. Portugal. Spain. Sweden. Switzerland. United Kingdom. and the United States of America. The School was sponsored by the European Physical Society (EPS). the Italian Ministry of Public Education (MPI). the Italian Ministry of Scientific and Technological Research (MRSI). the Sicilian Regional Government (ERS). and the Weizmann Institute of Science. This is the 25th anniversary of the School and. for the second time. the programme has been mainly devoted to the Superworld. Needless to say that the Superworld appears to be. at present. very far from the experimental axis. Nevertheless. the Superworld is a fascinating field of modern physics: we ought to know what boils in the heads of our theoretical colleagues. keeping in mind that the source of basic truth is. and will remain. experimental physics. Relevant news in experimental physics was scarce in the past year and the most interesting results have been reported. The future has also been presented with LEP. Gran Sasso. HERA: projects to become operative by 1000; and ELOISATRON as the driving force for Europe to keep a central role in Subnuclear Physics.