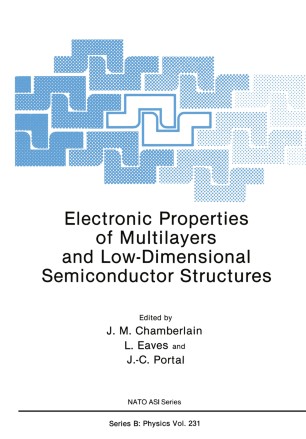 This Advanced Study Institute on the Electronic Properties of Multilayers and Low Dimensional Semiconductor Structures focussed on several of the most active areas in modern semiconductor physics. These included resonant tunnelling and superlattice phenomena and the topics of ballistic transport, quantised conductance and anomalous magnetoresistance effects in laterally gated two-dimensional electron systems. Although the main emphasis was on fundamental physics, a series of supporting lectures described the underlying technology (Molecular Beam Epitaxy, Metallo-Organic Chemical Vapour Deposition, Electron Beam Lithography and other advanced processing technologies). Actual and potential applications of low dimensional structures in optoelectronic and high frequency devices were also discussed. The ASI took the form of a series of lectures of about fifty minutes' duration which were given by senior researchers from a wide range of countries. Most of the lectures are recorded in these Proceedings. The younger members of the Institute made the predominant contribution to the discussion sessions following each lecture and, in addition, provided most of the fifty-five papers that were presented in two lively poster sessions. The ASl emphasised the impressive way in which this research field has developed through the fruitful interaction of theory, experiment and semiconductor device technology. Many of the talks demonstrated both the effectiveness and limitations of semiclassical concepts in describing the quantum phenomena exhibited by electrons in low dimensional structures.