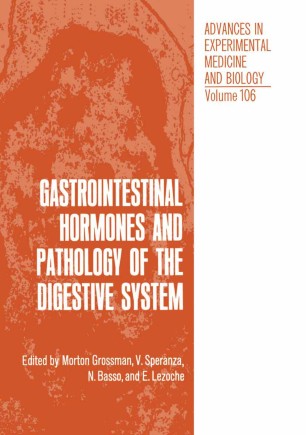 Gastrointestinal Hormones and Pathology of the Digestive System

Part of the Advances in Experimental Medicine and Biology book series (AEMB, volume 106)

The discovery that the same or similar peptides are present in endocrine cells and in neurons is one of the most exciting and provocative recent developments in biology. Suddenly neurophysiologists and endocrinologists have found that they have a great deal to discuss with each other. Substances originally isolated as hypothalamic hormones turn out to be abundantly present in neurons of other parts of the brain and in endocrine cells and neurons of the gut and pancreas. Similarly, substances originally isolated as gut hormones are found not only in gut endocrine cells but also in gut neurons and in brain neurons. It turns out that the group of peptides that we are accustomed to call gastrointestinal hormones are not all confined to the gastrointestinal tract and are not all solely hormones. We are learning that the chemical transmitters of the neurocrine, endocrine, and paracrine systems form a single group of related substances. This volume contains the latest installments in this fascinating story. It tells how these pep tides were isolated and their amino acid sequences determined, how the heterogeneity of most, perhaps all, of these peptides is being revealed as variant forms of them are discovered, how antibodies to these peptides are used as powerful tools to measure their concentrations in body fluids and to localize the cells in which they are synthesized and stored, and, finally, how the role of these substances in normal physiology and in pathological states is being unraveled.