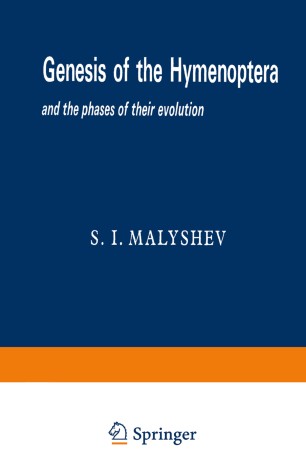 Genesis of the Hymenoptera and the phases of their evolution

The late Professor S. I. Malyshev, who died from a cerebral haemorrhage on 9 May 1967 at the age of 83 in the train while travelling to field work, was one of the foremost European students of the Hymenoptera, in particular of the habits of solitary bees, a subject on which he had published many papers since 1908, mostly in Russian. In 1935 he published an important paper on part of his work, and I helped to edit the publication, which was in English. A few years ago some of my friends in California asked me if I could not persuade him to complete his early paper on solitary bees, offering if necessary to arrange for a translation. When I wrote to Professor Malyshev making this suggestion he no longer had the health to produce a new work, but he sent me a copy of his recent book on the evolution of the Hymenoptera which he thought might be worth trans­ lating. Sir Boris Uvarov was good enough to translate for me the chapter and section headings, and it seemed to both of us that a lot of new ground was covered in a highly original way. The explanation of the changes in behaviour that must have taken place when the simple, plant-feeding saw­ flies developed into highly specialized parasites or into industrious, food­ collecting, social insects such as the ants, bees, and wasps can well be regarded as one of the major challenges to zoologists.