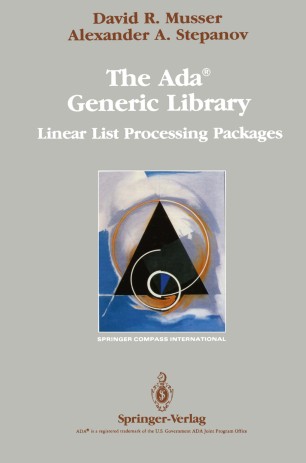 The Ada Generic Library provides an extensive well-documented library of generic packages whose use can substantially increase software productivity and reliability. The construction of the library follows a new approach whose principles include the following: - Extensive use of generic algorithms, such as generic sort and merge. - Building up functionality in layers. - Obtaining high efficiency in spite of the layering through the use of Ada's inline compiler directive. This volume contains eight Ada packages, with over 170 subprograms for various linear data structures based on linked lists. Professional Ada programmers will find The Ada Generic Library an invaluable tool in building application programs or in further construction of generic libraries. For these users the source code can be obtained on diskettes. The volume will also be useful to those interested in programming methodology, software reusability, and software engineering.