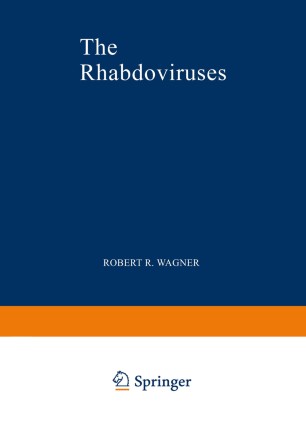 The viruses of the family Rhabdoviridae have an exceedingly broad host range and are widely distributed throughout the animal and plant king­ doms. Animal rhabdoviruses infect and often cause disease in insects, fish, and mammals, including man. The prototype rhabdovirus, vesicular stomatitis virus !VSV), has been extensively studied and provides perhaps the best model system for studying negative-strand viruses. The popularity of VSV as a model system is to a considerable extent due to its relative simplicity and to its rapid growth, generally to high titer, in many cell types ranging from yeast to human. The nucleocapsids of these viruses also carry transcriptional and replicative functions that are expressed in cell-free systems. The first RNA-dependent RNA poly­ merase was described in VSV and its G protein provided an early model system for studying the synthesis, processing, and membrane insertion of mammalian glycoproteins. VSV is also highly cytopathogenic and has been studied quite extensively for its capacity to kill cells and to shut off cellular macromolecular synthesis. Even earlier, VSV was discovered to be highly susceptible to the action of interferons and has served ever since as a means for quantitating the activity of interferons. To my way of thinking, the spark that ignited the explosion of re­ search in this field was struck at the First International Colloquium on Rhabdoviruses, attended by 30 or so participants in Roscoff, France, in June 1972.