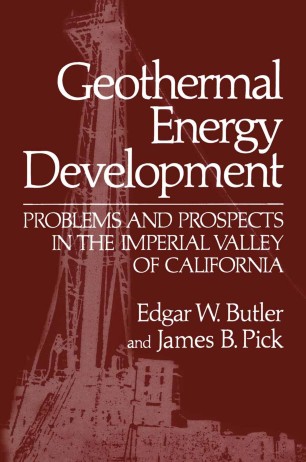 Problems and Prospects in the Imperial Valley of California

What are the effects on an isolated region when an entirely new and major energy resource is developed to commercial proportions? What happens to the population, the economy, the environment, the community, and societal relations? How does the government frame­ work respond, the family structure adapt, the economy expand, and life styles change under the impact of new forces which hold a prom­ ise of much benefit and a risk of adverse consequences? Imperial County, California, has a population of less than 90,000 people. This population has been exceptionally stable for years, cen­ tered as it is in an agricultural and recreational framework. The county is somewhat cut off from other areas by geographic barriers of moun'" tains and desert, by state and natural boundaries, and is the most remote of all 58 counties of California from the state capitol, Sacra­ mento. In the decade of the 1950s, geographical explorations for oil re­ vealed some anomalous structures underlying the desert and agricul­ tural areas in Imperial County. These, when drilled, seemed to be oil­ less and hot, and so lacked attractiveness to petroleum wildcatters. In the decade of the 1960s, Dr.