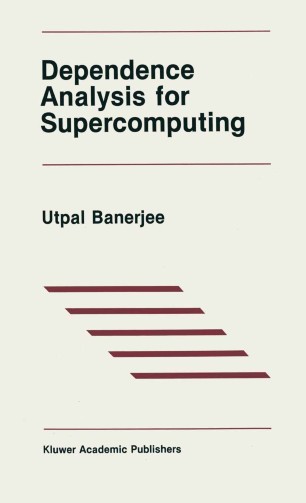 Part of the The Kluwer International Series in Engineering and Computer Science book series (SECS, volume 60)

This book is on dependence concepts and general methods for dependence testing. Here, dependence means data dependence and the tests are compile-time tests. We felt the time was ripe to create a solid theory of the subject, to provide the research community with a uniform conceptual framework in which things fit together nicely. How successful we have been in meeting these goals, of course, remains to be seen. We do not try to include all the minute details that are known, nor do we deal with clever tricks that all good programmers would want to use. We do try to convince the reader that there is a mathematical basis consisting of theories of bounds of linear functions and linear diophantine equations, that levels and direction vectors are concepts that arise rather natu­ rally, that different dependence tests are really special cases of some general tests, and so on. Some mathematical maturity is needed for a good understand­ ing of the book: mainly calculus and linear algebra. We have cov­ ered diophantine equations rather thoroughly and given a descrip­ of some matrix theory ideas that are not very widely known. tion A reader familiar with linear programming would quickly recog­ nize several concepts. We have learned a great deal from the works of M. Wolfe, and K. Kennedy and R. Allen. Wolfe's Ph. D. thesis at the University of Illinois and Kennedy & Allen's paper on vectorization of Fortran programs are still very useful sources on this subject.