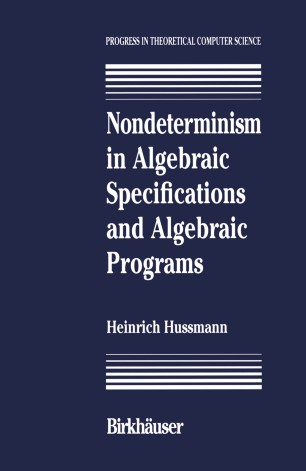 Algebraic specification, nondeterminism and term rewriting are three active research areas aiming at concepts for the abstract description of software systems: Algebraic specifications are well-suited for describing data structures and sequential software systems in an abstract way. Term rewriting methods are used in many prototyping systems and form the basis for executing specifi­ cations. Nondeterminism plays a major role in formal language theory; in programming it serves for delaying design decisions in program development and occurs in a "natural" way in formalisations of distributed processes. Heinrich Hussmann presents an elegant extension of equational specification and term rewriting to include nondeterminism. Based on a clean modeltheoretic semantics he considers term rewriting systems without confluence restrictions as a specification language and shows that fundamental properties such as the existence of initial models or the soundness and completeness of narrowing, the basic mechanism for executing equational specifications, can be extended to nondeterministic computations. The work of Heinrich Hussmann is an excellent contribution to Algebraic Programming; it gives a framework that admits a direct approach to program verification, is suitable for describing concurrent and distributed processes, and it can be executed as fast as Prolog.