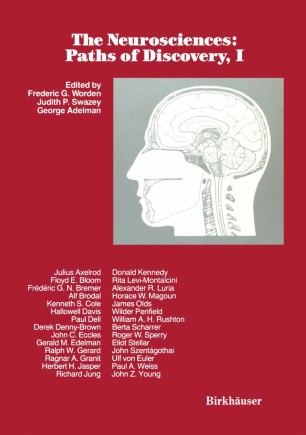 The Neurosciences: Paths of Discovery, I

To commemorate properly the 70th birthday of a man who, by his very nature, is too busy to pause for any kind of ceremonial event unless it has a concomitant functional output was a difficult problem for the Staff and Associates of the Neurosciences Research Program. Frank (F. O. S. ) has always dreaded the prospect that sometime it might be appropriate for his colleagues to present him a Fest­ schrift. In fact, "Fest me no Schriften" became his battle cry, expressing his feeling that the idea of testimonials clustered into a book was anathema. So the "break­ through" idea for the planners was to organize a symposium around the theme of discovery in neuroscience that would be valuable scientifically and, in its demon­ stration of interdisciplinary interaction, would support that emphasis in Frank's career. After much planning a program was developed, beginning with a birthday party the evening before, followed by the two-day symposium, and closing with the first F. O. Schmitt Lecture in Neuroscience. We hope that publication of the scientific proceedings in this volume will be of interest not only to the neuroscience community, but also to a broad general readership interested in discovery, under­ standing, and the creative processes in scientific work. An organizing committee, chaired by Fred Worden, collected advice and guidance leading to the selection of speakers whose scientific careers have played an important part in the recent history of modern neuroscience.