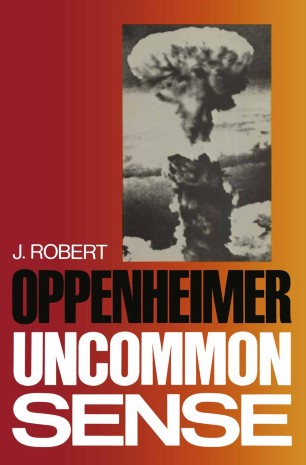 "I think that we will not be very successful in discouraging other power from this course [of a nuclear military program] unless we show, by our own example and conviction, that we regard nuclear armament as a transitory, dangerous, and degrading phase of the world’s history…"

These words could have been said today; that they were said more than twenty years ago, by one of the "fathers" of the atom bomb, gives them even greater impact. J. Robert Oppenheimer, a leading physicist in the Manhattan Project, recognized that scientific inquiry and discovery could no longer be separated from their effect on political decision-making, social responsibility, and human endeavor in general. He openly addressed issues of common concern and as a scientist accepted the responsibility brought about by nuclear physics.

This collection of essays and speeches, only a few of which have been previously published, presents an extraordinary thinker and scientist as well as a compassionate human being. No issue is too small or too large if it is in some way connected to the emergence of a weapon as terrible and powerful as the atom bomb. Oppenheimer discusses the shift in scientific awareness and its impact on education, the question of openness in a society forced to keep secrets, the conflict between individual concerns and public and political necessity, the future of science and its effects on future politics---in short, the common and uncommon sense we find in our modern day reality.

Uncommon Sense presents a responsible scientist and a concerned man who foresaw the problems the discovery of fission would create. And we should no neglect to read between the lines: The peak of Oppenheimer’s career coincided with the McCarthy era, the repercussions of which strongly affected his personal and professional life. The themes of openness and freedom becomes, therefore, recurring concerns in this collection of essays and speeches.