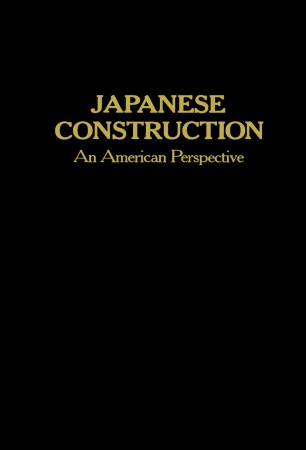 The 1970s and 1980s have been marked by turbulent times for certain portions of America's industrial base, as their dominance of many do­ mestic and foreign markets has eroded. During such times of stress it is tempting to create scapegoats in order to rationalize shortcomings. Much is heard about the Japanese in this regard. How they have contributed to the deterioration of specific segments of American indus­ try, how jobs in the U. S. are being lost to foreign competition, and how the resulting trade deficit will be the downfall of us all. Much of this rhetoric has been directed against the Japanese automobile manu­ facturers and the Japanese electronic industry, which has been accused of "dumping" product into the United States. It was not until Japan unveiled its plan to build the multi-billion dollar Kansai Airport project that Japanese restrictive bidding practices in their domestic construction market became headline news. Construc­ tion then became a popular subject for "Japan Bashing" and attention was focused on the activities of Japanese contractors around the world, and, more particularly, on their involvement in the U. S. construction market. Well, the Japanese construction companies are in the United States and have been for some time. They have been awarded many contracts for federal and municipal construction projects and they have negotiated a significant number of construction contracts in the private sector.