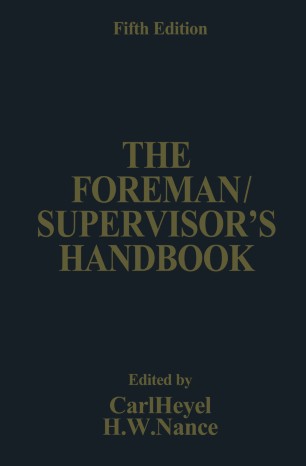 The Foreman/Supervisor's Handbook is offered as a com­ prehensive and authoritative text which presents the kind of prac­ tical information the foreman or supervisor needs in order to be effective on the job. It completely revises and updates The Foreman's Handbook, a work which, through four previous edi­ tions, has become the standard text in its field. The term "foreman/supervisor" in the title of the new edition was decided upon by the editors despite a reluctance to tamper with a well established name, in recognition of a change in usage which has come about over the years. "Supervisor" is now more generally used in industry for the first level of management and is espe­ cially appropriate since the emerging role of women in super­ visory (and higher) positions has rendered the earlier, gender­ specific term less properly descriptive. Moreover, although the orientation of the book is to manufacturing operations, the prin­ ciples and techniques discussed have wide application in office operations, where the term "supervisor" is the designation uni­ versally used. To retain continuity with the previous editions, the compromise term "foreman/supervisor" was adopted. As in previous editions, each chapter is written by an authority in the ~ubject covered. Each, morever, stands on its own feet, i. e. , it can be read as a separate article, independent of preceding or succeeding chapters.