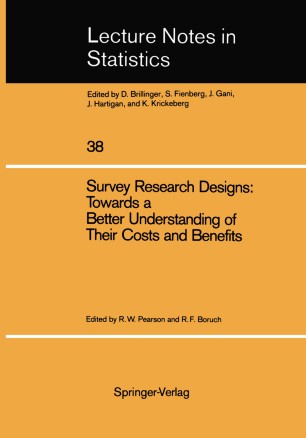 Survey Research Designs: Towards a Better Understanding of Their Costs and Benefits

ROBERT F. BORUCH AND ROBERT W. PEARSON During the 13th Century. a vigorous argument among Middle Eastern rabbis concerned how one ought to make a fair assessment of an olive crop value for tithing purposes. Should one consolidate the crop. systematically mix the olives. and then conscientiously draw a small random sample? Or. might one simply grab a handful of olives from the nearest basket and make an estimate of the crop's worth. The issue. of course. is one that research designers and research users confront often -- balancing the need for information against the resources that must be put into actually collecting the data -- in deciding how much effort is warranted to produce fair evidence. For the rabbis. who argued for twenty-five years over the matter. the issue can be resolved with a special rule. In this as in other cases. if the demand for information is biblical in origin -- if God is its source. then one ought to be considerably conscientious; a more scientific and more expensive endeavor is warranted. We may at times subscribe to this kind of rule of thumb in determining what quality of information is warranted under what conditions. But other rules and approaches are possible. And as medieval Jewish. Arabic. and Christian philosophy suggests. the alternatives need to be thought out and tested. Our interest is a bit more contemporary but has some spiritual kinship with early scholars' interest in empirical evidence.