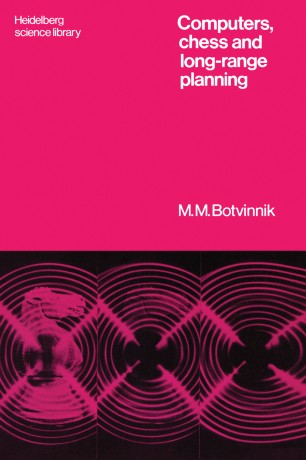 Mihail Moiseevich Botvinnik is an electrical engineer by profession; during World War II he headed a high-tension laboratory in the Urals and was decorated by the USSR for his accomplishments. At present, he is the head of the alternating-current machine laboratory at the Moscow Institute of Power Engineering. He is also a world-renowned chess player. He was born in 1911, and by 1935 had become a Grandmaster of Soviet chess. In 1948 he won the world chess championship and held the title until 1963 (except for a two-year break). His chess style has been characterized as deep, objective, serious, and courageous. In this book, the quality of his thinking is revealed in his study of the basic thought processes of master chess players, and his reduction of these processes to mathematical form. This formalization of thought processes is a contribution to science at three levels: at the immediate level, it provides a basis for a computer program that seems likely to succeed in playing chess; at the middle level, game-playing programs help us to study and rationalize the processes of planning and decision-making; and, at the highest level, the study of the mind in action, as in the game of chess, leads to an understanding of human thought and of the human psyche.