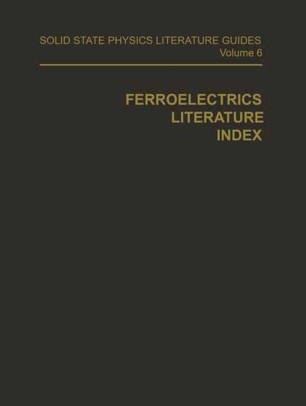 Research on ferroelectricity and ferroelectric materials started in 1920 with the discovery by Valasek that the variation of spontaneous polarization in Rochelle salt with sign and magnitude of an applied electric field traced a complete and reproducible hysteresis loop. Activity in the field was sporadic until 1935, when Busch and co-workers announced the observation of similar behavior in potassium dihydrogen phosphate and related compounds. Progress thereafter continued at a modest level with the undertaking of some theoretical as well as further experimental studies. In 1944, von Hippel and co-workers discovered ferroelectricity in barium titanate. The technological importance of ceramic barium titanate and other perovskites led to an upsurge of interest, with many new ferroelectrics being identified in the following decade. By 1967, about 2000 papers on various aspects of ferroelectricity had been published. The bulk of this widely dispersed literature was concerned with the experimental measurement of dielectric, crystallographic, thermal, electromechanical, elastic, optical, and magnetic properties. A critical and excellently organized cpmpilation based on these data appeared in 1969 with the publica­ tion of Landolt-Bornstein, Volume 111/3. This superb tabulation gave instant access to the results in the literature on nearly 450 pure substances and solid solutions of ferroelectric and antiferroelectric materials. Continuing interest in ferroelectrics, spurred by the growing importance of electrooptic crystals, resulted in the publication of almost as many additional papers by the end of 1969 as had been surveyed in Landolt-Bornstein.