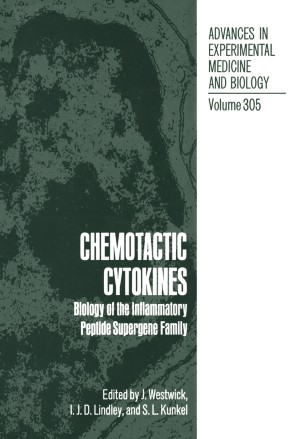 Part of the Advances in Experimental Medicine and Biology book series (AEMB, volume 305)

The existence of a new family of chemotactic cytokines was realised in 1987 following the isolation and structural determination by several groups of a peptide consisting of 72 amino acids which was a potent activator of neutrophils and a chemotactic agent for lymphocytes. The first symposium of this series was held at the Royal College of Surgeons of England in December 1988, entitled Novel Neutrophil Stimulating Peptides, and brought together the majority of the laboratories which had published in this area, see Immunology Today 10: 146-147(1989). Since the first symposium there has been a dramatic increase in our knowledge of the biology of this family of structurally related peptides. The Second International Symposium on Chemotactic Cytokines was held at the Royal College of Surgeons of England in June 1990. The aim of this symposium was to provide both a forum for discussion and to determine whether this knowledge can be utilised in the design of novel therapeutic strategies for the treatment of inflammatory disorders. Although the majority of studies have been concerned with the regulation of these peptides at the molecular and cellular level, there is now evidence to suggest that specific members of this superfamily have a role in the pathogenesis of a number of diverse diseases including arthritis, psoriasis, atherosclerosis, wound repair, inflammatory lung diseases and glomerulonephritis.