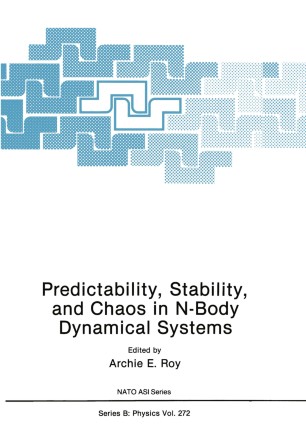 The reader will find in this volume the Proceedings of the NATO Advanced Study Institute held in Cortina d'Ampezzo, Italy between August 6 and August 17, 1990 under the title "Predictability, Stability, and Chaos in N-Body Dynamical Systems". The Institute was the latest in a series held at three-yearly inter­ vals from 1972 to 1987 in dynamical astronomy, theoretical mechanics and celestial mechanics. These previous institutes, held in high esteem by the international community of research workers, have resulted in a series of well-received Proceedings. The 1990 Institute attracted 74 participants from 16 countries, six outside the NATO group. Fifteen series of lectures were given by invited speakers; additionally some 40 valuable presentations were made by the younger participants, most of which are included in these Proceedings. The last twenty years in particular has been a time of increasingly rapid progress in tackling long-standing and also newly-arising problems in dynamics of N-body systems, point-mass and non-point-mass, a rate of progress achieved because of correspondingly rapid developments of new computer hardware and software together with the advent of new analytical techniques. It was a time of exciting progress culminating in the ability to carry out research programmes into the evolution of the outer Solar 8 System over periods of more than 10 years and to study star cluster and galactic models in unprecedented detail.