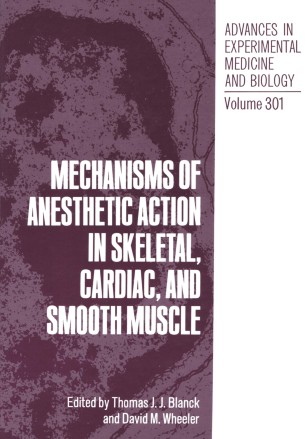 Mechanisms of Anesthetic Action in Skeletal, Cardiac, and Smooth Muscle

Part of the Advances in Experimental Medicine and Biology book series (AEMB, volume 301)

The volatile anesthetics continue to be one of the most mysterious yet commonly used class of drugs in medical practice today. A prominent and troublesome side effect of volatile anesthetics is their ability to alter hemodynamics. This arises from two diverse but interrelated phenomena, depression of cardiac contractility and dilation of the vasculature. These effects of volatile anesthetics on cardiac and smooth muscle plus the action of volatile anesthetics on skeletal muscle in the malignant hyperthermic syndrome have led to concern about the interaction of volatile anesthetics (and other anesthetic agents) with calcium metabolism in the muscle cell. Many of the phenomena caused by anesthetics appear to have common mechanisms in all of the muscle types; however, the differences among skeletal, cardiac and smooth muscle also lead to distinct effects of the anesthetics in each. Given the diverse research disciplines which have been brought to hear on the mechanism of anesthetic alteration of contractility, the symposium from which this book originates was convened for the purpose of gathering those with common interests in anesthetic agents and their cellular and subcellular actions in muscle. The recent symposium had its origins in a small but exciting meeting that took place at the University of Texas at Houston in 1984. At that time, Robert Merin and Jacques Chelly convened a group of people who had interest in cardiac muscle and calcium antagonists.