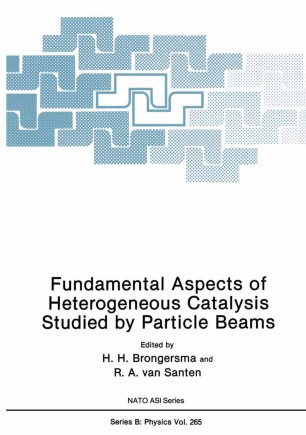 Present day heterogeneous catalysis is rapidly being transformed from a technical art into a science-based technology. A major contribution to this important change is the advance of surface spectroscopic techniques able to characterize the complex surfaces of the heterogeneous catalytic system. The Advanced Study Institute (on which the current proceedings is based) has as its primary aim the bringing together of a variety of lecturers, outstanding in those fields of experience, to enable a broad coverage of different relevant approaches. Not only catalyst characterization but also catalytic reactivity had to be covered in order to relate catalyst properties with catalyst performance. Since modern catalysis relates catalytic performance to microscopic molecular catalyst features, theoretical electronic aspects also had to be included. The Advanced Study Institute had a unique feature in that it brought together physicists, catalytic chemists and chemical engineers whom rarely directly interact. From physics especially new experimental possibilities of beams were emphasized. At present it is possible to obtain very detailed information on model catalysts, whilst the applications to practical catalysts are gaining rapidly in sophistication. Apart from the plenary lectures, the Institute included "hot topics" to highlight special developments and offered participants the opportunity to present contributed papers (either orally or as a poster). These contributions formed an integral part of the summer school and significantly enhanced the interaction between participants. Inclusion of the hot topics and contributed papers in these proceedings give them an added topical value.