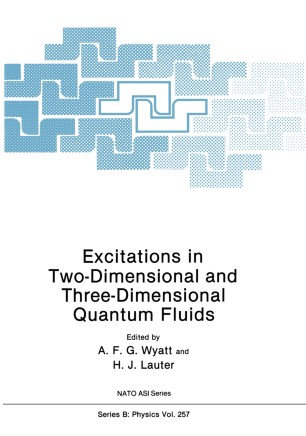 The study of quantum fluids in three dimensions has been an important area for many years as it embraces Bose-Einstein condensation, superfluidity and macroscopic quantisation. These are fundamental aspects of physics which can be studied in liquid 4He. In contrast, quantum fluids in two dimension is more recent and less developed. Nevertheless it has shown many interesting phenomena including a rich variety of phases and the Kosterlitz-Thouless transition. Intermediate between these dimensions are the restricted geometries of micro porous materials into which He may be introduced. The main quantum materials considered are 4He, 3He, D2, H2, H and electrons on the surface of 4He. The superfluid phases of 3He were excluded, e~cept for superfluid film flow, as 3He involves a separate set of problems. These proceedings arise from a lively Advanced Research Workshop on Excitations in Two-Dimensional and Three-Dimensional Quantum Fluids held in Exeter 10-15 August 1990. Fifty scientists took part and each provided a written contribution. Perhaps it is a testimony to the discussions that several papers were revised by the authors after the meeting. The order of the chapters is the same as the presentations at the workshop. This arrangement starts with 4He in three dimensions which establishes a base from which the two dimensional properties can be viewed. At the end of each section there is a report on the discussion session. These are interesting and useful chapters as they clarify points made in the papers and define the boundary of current understanding.