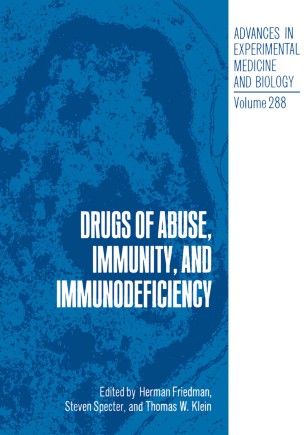 Drugs of Abuse, Immunity, and Immunodeficiency

Part of the Advances in Experimental Medicine and Biology book series (AEMB, volume 288)

This volume is based on the program of the International Conference on Drugs of Abuse, Immunity and Immunodeficiency held in Clearwater Beach, Florida. It was sponsored by the University of South Florida College of Medicine with the support of the National Institute on Drug Abuse. During the past few decades, drugs of abuse, including marijuana, cocaine, opiates and alcohol, have been studied by biomedical scientists in terms of the systemic effects of the drugs as well as alterations in neurophysiology and the psychology. More recently, the scope of such investigations has been broadened to include alterations within the immune system, and the influence of altered immunity on physiological and psychological consequences of drug abuse. In this regard, participants in the Clearwater Beach conference provided new information concern­ ing both basic and clinical aspects of drugs of abuse and immunity, especially immunodeficiency. Advances have been made in recent years in understanding the nature and mechanisms regulating the immune response and the mechanisms by which drugs may influence immune responses. In particular, the emergence of psychoneuroimmunology as a new discipline has heightened interest in immune responses influenced by psychoactive drugs. This has resulted in interdisciplinary investigations involving clinical and basic scientists including microbiologists, immu­ nologists, physiologists, psychiatrists, oncologists and others. The recreational use of the above mentioned drugs by large numbers of individuals has aroused serious concern about the consequences of this activity.